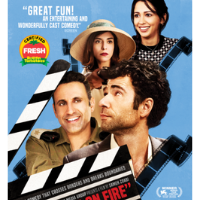 A good laugh can be good therapy.  Comedy can lift us out of stressful times and restore us to high spirits.  When some of us are feeling isolated especially during this pandemic, laughter can help us stay connected.  Join Film Professor Will Costanzo for an interactive  exploration of humor and global movie comedy.  Watching film clips together from the great traditions of European, East Asian  and So. American cinemas, you’ll have a chance to see what makes people laugh around the world.  This season we travel north & south, from Scandinavia to Latin America to see how climate & culture can influence our sense of humor & the kinds of movies we watch.   On March 31 we’ll explore THE BEST COMEDY OF RUSSIA.  The land that gave us Chekov’s humanistic humor and Gogol’s biting satires also produced over 100 years of movie comedies.  Along with selected film clips we’ll  investigate the role of humor  as an escape from oppression & an instrument for change.  On April 28, we’ll explore THE BEST COMEDY OF ISRAEL.   We’ll watch a selection of recent movie clips to explore how directors & comic actors have responded to the serious issues facing their country with jokes, satire and uproarious laughter.

Dr. Costanzo is a SUNY Distinguished Teaching Professor of English & Film.  He has published seven books on film including his latest, WHEN THE WORLD LAUGHS: FILM COMEDY EAST AND WEST.

To join our  Zoom group,  please  RSVP below.