A World of New Discoveries Awaits You ...

Music with Kurt Gallagher at the Library 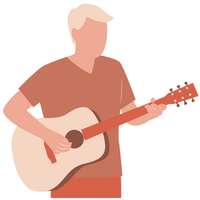 Mr. Kurt Gallagher keeps audiences busy! Children ages six months & up will have a blast moving, giggling & making music, as they stomp, slap, clap, & flap along to Kurt’s interactive songs. All the while the children won’t realize they’re learning lessons about music and language, as Kurt sings linguistically playful songs while demonstrating several instruments and various guitars, including a home-made, recycled, Gas Can Guitar. With smaller “Mommy & Me” audiences, Kurt shares drums, maraca, and scarves with all the young musicians.
*Masks optional
Mr. Kurt Gallagher has been making music with young people every day for 30 years, doing programs for schools, libraries, camps & various organizations. His programs are always educational, entertaining & engaging.
Kurt’s on a lifelong journey to show children that music is made by people, not machines. He wants children to make as much music as possible during his performances, as he encourages them to slap, clap, shake, stretch, spin, stomp & sing along. He also hopes to spark their interest in language by showing how much fun stories can be. Time flies as Kurt does songs and gags with guitar, ukulele, jaw harp, slide whistle, limberjack puppets, & other musically silly stuff.
A talented and imaginative songwriter, Kurt Gallagher has made six albums of original music for children and a DVD of a concert performance in New York City.

Subscribe to receive the latest Library news and events.