A World of New Discoveries Awaits You ...

Those Funny Boys from Brooklyn 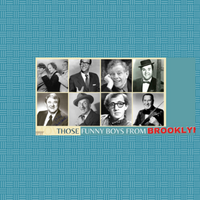 From the tree-lined streets of beautiful Brooklyn,  we proudly introduce to you a plethora of some of the wackiest, zaniest, and most outrageous comedy stars of the 20th Century! Join us as we reveal the backstory of EIGHT Brooklyn-born classic funnymen including Jimmy Durante, The Three Stooges, Phil Silvers, Henny Youngman, Woody Allen,
Dom DeLuise, Jerry Stiller, and Buddy Hackett. Included in this hilarious presentation are rare photos and video clips depicting the comedy stars at their best!  Plus, don’t be surprised if several other notable comedy Brooklynites make an unannounced appearance.  Join us for this historic fun-filled program presented by Sal St. George, Adjunct Professor and Pop Culture Historian, writer, director, and producer as well as founder of Living History Productions.

Sign up to receive the latest news and events from Pound Ridge Library.